Talking of the Battle of Hastings and its connection with Penge, as I was in my last post: on a recent visit to the Oxfam shop in Rochester I picked up a packet of miscellaneous postage stamps which included this lovely little item:- 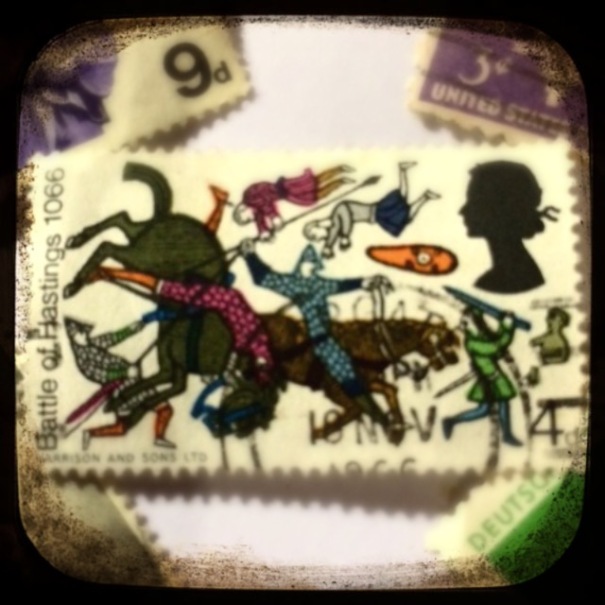 This is the fourpenny stamp which was part of the special set issued in 1966 to mark 900 years since the Battle. I remember this stamp well. It came out on 14th October, the anniversary of the Battle, and I was 11. Something about the lovely little image taken from the Bayeux Tapestry, its colour and movement, appealed to me and stuck with me, and I recognised it  immediately years later in Rochester.

It also moved me to dig out my equally wonderful King Penguin about the Bayeux Tapestry.

Published in 1943, this was part of a series of beautifully neat and meticulously designed small hardbacks, put out by Penguin during and after the War. King Penguins were part of the wartime drive for democratic self-education. They were edited by Nicolaus Pevsner, the German émigré who went on to teach us about our own architectural heritage with his guides to the Buildings to England.

One of the great things about King Penguins is their use of colour. At a time when publishers were subject to War Economy Standards, which governed the quality of paper, ink and bindings, I really don’t know how Pevsner or Penguin got permission to splash out on colour reproductions: maybe they convinced someone somewhere that a bit of colour would be good for morale. Whatever the truth, it’s the colour that made – and makes – King Penguins special. So – in glorious wartime colour – here’s King Harold receiving news of the comet that betokened an upheaval in the state and the advent of William …

One last thing. 1966, the 900th anniversary of the Battle of Hastings, was exactly 50 years ago. 2016 is the 950th anniversary: not as iconic as the 900th, perhaps, but certainly significant, and even poignant, given that this is also the year when we’ll be voting on EU membership. Food for thought.

I’ve met people who’ve spent all their lives in South London, but still don’t know where Penge is. 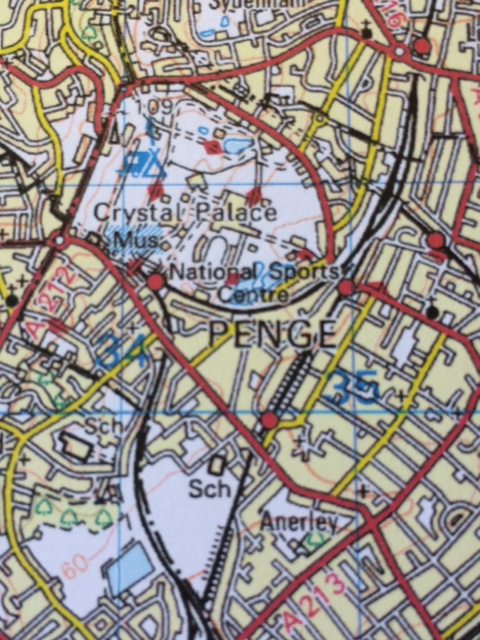 But Penge was here long before all these other places. It doesn’t even have an English name. Its name is Celtic or British, belonging to the language of the people who lived here before the Romans arrived, the language that survives today as Welsh. It means something like ‘High Wood’ or ‘Wood End’.

Penge is ancient. So the really interesting question is not: “Where is Penge?” but “Where was Penge?” Where was its original boundary? What was its function? What other places was it connected with?

Although it is mentioned in a tenth century charter, we can only really start to pin things down from the following century. After the Battle of Hastings, King William and the Normans divided much of the country between themselves and the Church, and this was when Penge acquired the status that would define it for centuries to come. As part of a wider carve-up which transformed South London, the manor of Battersea was granted to Westminster Abbey. And as part of this package, Penge was included as a “detached hamlet”.

This was not an unusual arrangement. Many medieval estates and manors owned “detached” parcels of land. In the case of Penge, its main value was as a source of timber. So, despite its location several miles from the Thames, adjacent to Beckenham, Camberwell, Croydon and Lambeth, Penge’s land and produce belonged to the riverside manor of Battersea.

This connection survived for 800 years, until the second half of the nineteenth century. A verbal description dating from the seventeenth century is summarised in the Victoria County History:-

“The boundaries of the hamlet on the north in February 1604–5 were the common of Rockhills (evidently Rockhills in Upper Sydenham, immediately north of the Crystal Palace) and the ‘Shire Ditch’ leading past the house called ‘Abbetts’ to the north corner of ‘Lord Riden’s Wood.’ The Shire Ditch also bounded the hamlet on the east and was crossed by ‘Willmoores Bridge,’ half in Kent and half in Surrey. On the south it was bounded by the waste or common of Croydon, the green way from Croydon to Lewisham. On the west was a wood ‘of Mr. Colton’s’ in Camberwell parish, which stretched from Vicker’s Oak to the Low Cross near Rockhills.”

I’m not aware of any detailed maps of the area dating back as far as the seventeenth century (although Speed’s large-scale map of Surrey, produced in 1610, clearly shows ‘Pensgreene’ which is rather gratifying). However, from the mid-eighteenth century onwards detailed maps were being produced. So over the coming weeks, drawing on these maps and other sources, and on the 1604-5 text above, I will be trudging around modern streets and footpaths looking for surviving traces of the ancient boundary of the detached hamlet of Penge.