The previous post found that in the seventeenth century, what is now Sydenham Hill was apparently called ‘the common of Rockhills’. So what exactly is a ‘common’? 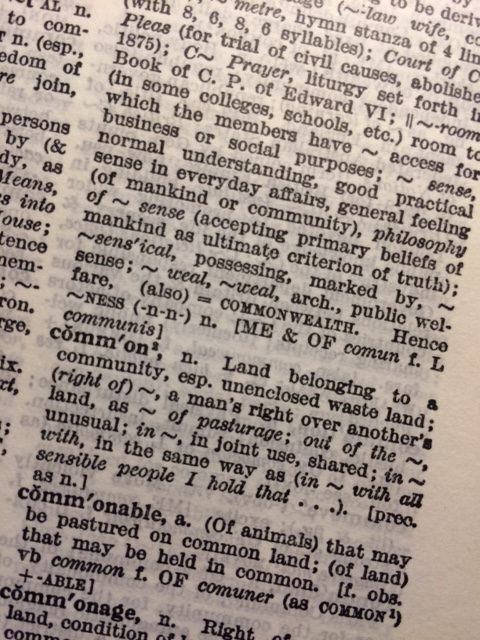 As Raymond Williams said 40 years ago, the word ‘common’ “has an extraordinary range of meaning”. On the one hand there is a plebeian dignity in the notion of ‘the common people’ as opposed to the elite, or resources ‘held in common’ as opposed to private property. On the other hand, ‘common’ can also indicate vulgarity or lack of refinement. This ambiguity isn’t new. In the Civil War in the 1640s, Parliamentary troops refused to be called ‘common’ soldiers and insisted that they were ‘private’ soldiers; but with the War won and the king executed, the reformed state ushered in by those same soldiers was known as the ‘Commonwealth’.

The notion of ‘common land’, local ‘commons’, also carried both meanings depending on who was speaking. My book describes the long battle over Penge Common, between the Battersea Vestry and various private landowners. For the Vestry and local poor, Penge Common offered a customary right of access to food, firewood and grazing. For the landowners, all ‘common land’ was waste, squandered by the ignorant, unproductive and unprofitable.

In the case of Penge, the common was eventually enclosed or privatised: carved up, sold off, and developed for housing. Other South London commons were also lost, such as Kennington Common, famous for its enormous Chartist demonstrations in the 1840s,

which is now the site of Kennington Park.

Others fared better. Streatham Common is still with us, despite attempts by the Duke of Bedford to sell off bits of it in the 1790s: the local commoners intervened, and he beat a retreat. We’ve still got Clapham, Eltham, Mitcham, Tooting Bec, Wandsworth, Wimbledon, and others. And interestingly, perhaps paradoxically, the Corporation of the City of London preserves the commons at Coulsdon, Farthing Down, Kenley, Riddlesdown, Spring Park and West Wickham. Each patch of common land, a part of our common history.