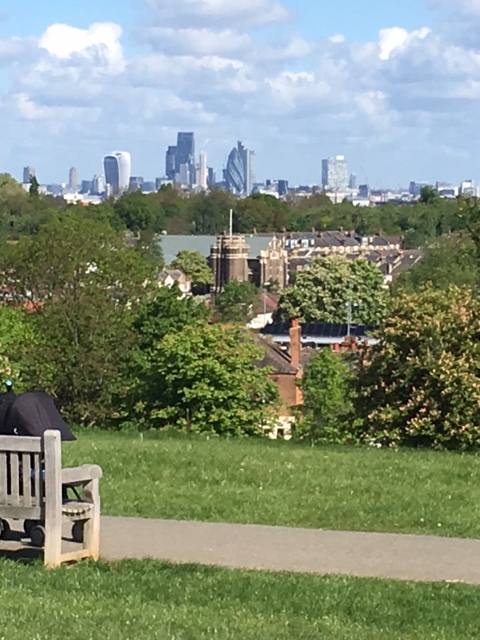 Most of South London’s Roman roads coincide, roughly or in part, with modern roads: Watling Street with the A2; Stane Street with the A3; the Brighton road with the A23. But there is one Roman road which is positively modest, self-deprecating, leaving no visible mark on the modern townscape, remembered by no modern highway. This is the London to Lewes Way which cuts through South-East London, from Peckham through Nunhead and Brockley and Beckenham and West Wickham, and onwards to the south.

One practical result of its modesty is that for a walker, following this route on foot is a far more pleasant experience than following the others. Rather than a charmless tramp along busy main roads infested with exhaust fumes and bad temper, the Lewes Way offers quiet streets, footpaths and parks.

This was not a military highway but a working road, connecting Roman Londinium with the industrial zone in the Weald: charcoal-burners and iron-works. But this doesn’t mean that it was a cart-track, or that it took shape in a casual manner. It was constructed by professional engineers, along straight alignments where possible, using high ground as a vantage point to alter those alignments where necessary. At Blythe Hill for instance, the alignment shifts from a south-easterly to a more southerly direction.

Blythe Hill also serves as a break-point in my own walk along the Lewes Way as it progresses through South-East London. This post records the first stretch from Peckham. The next will carry on from Blythe Hill to the south.

The Lewes Way heads north to south, and its starting point is its junction with Watling Street, the Roman road to Kent, which goes west to east.

The junction is, in fact, somewhere around here:

This is Asylum Road, named after the very large and impressive almshouses built by the Licensed Victuallers Association in the 1820s/30s. (As reported in a previous post, at one point Penge’s Watermen’s Almshouses were going to be located here as well, and were only re-routed to Penge after a timely intervention by a wealthy local resident).

The view above is looking north-east, so we must imagine Watling Street cutting across in front of us to meet the Lewes Way behind the houses, with the Way itself setting off to the south-east, to our right.

It would be nice if the route of the Lewes Way ran neatly down the middle of Asylum Road, but it doesn’t. Instead, it runs through the back-gardens of the houses on its east side, and for much of its passage through South-East London it is equally self-effacing. It rarely coincides directly with a modern road or path. The best way to follow it, therefore, is to identify a few ‘marker points’ where we know that we are on its track.

For instance, after running down behind Asylum Road, the Lewes Way crosses Queens Road about here, at the junction with York Grove, a few yards east of Queens Road Peckham station:

It then cuts uphill to the east of Nunhead Station, to run through some more back gardens, this time behind the houses on the east side of Ivydale Road:

The line of the Lewes Way runs eerily parallel to the line of the northern section of Ivydale Road, and this was noticed by the archaeologists – messrs. Davis and Margary – who first established its route in the 1930s. Some Roman routes are ‘remembered’ by parish or county boundaries, but this is not the case with Ivydale Road. Instead, the line of the Lewes Way may have been ‘remembered’ as a property boundary, carried down through the centuries as the plot of land was bequeathed and sold on, until eventually a commercial builder acquired it and unwittingly reproduced the old Roman line in the form of a nice new residential street.

Our next ‘marker point’ is the footbridge which crosses the railway line just east of Camberwell Cemetery, between Brockley Way and Eddystone Road:

A bit of imagination is required here. The cutting through which the railway now runs was first made for the Croydon Canal in the early nineteenth century. When the Canal Company went bankrupt in the 1830s, the canal was drained and a railway was run along its bed. But this is all recent history compared to the age of the Roman road which we are trying to follow. We must try to forget the cutting, the canal, the railway, and the footbridge, and imagine this site as an unblemished woodland ridge. From Queens Road onwards the Lewes Way has been coming up a gentle slope, and this site marks its top. From here, the Way heads downhill towards Brockley Rise, running straight through the middle of St Hilda’s Church: 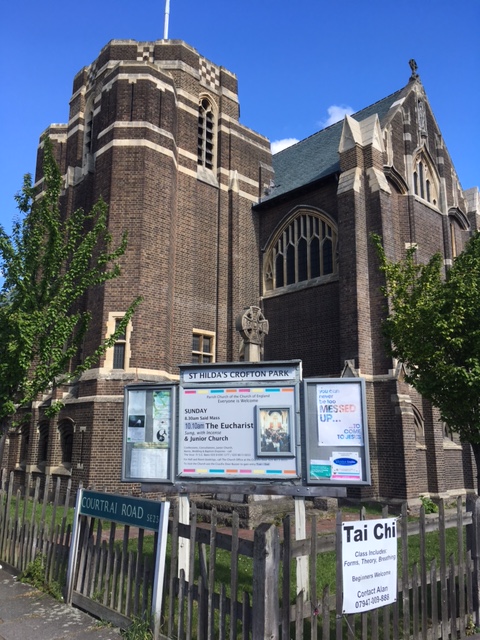 From St Hilda’s it ploughs on, up the hill on the other side of Brockley Rise, heading for the top of Blythe Hill. From here we can look back along the line of the Lewes Way, with St Hilda’s in the foreground, and the glass towers of the City beyond:

And if we turn around to the south we can see where our modest way will take us next time, guided of course by the new alignment prescribed by the Roman engineers when they stood here two thousand years ago:

Next time: Beckenham and beyond.