One day in late 1916, in the Refreshment Rooms at Crystal Palace Low Level Station (today’s Crystal Palace Station), Walter Stamforth bought a drink for his friend Harold Manley. The drink was served by the barmaid Kate Truett, whose employer was Frank Hayward, the licensee.

In January 1917, all four of them appeared at Penge Police Court, charged with committing or facilitating the crime of buying intoxicating liquor to be consumed by another person. Stamforth had broken the law by buying the drink, Truett by serving it, Manley by drinking it, and Hayward because it had all happened on his premises. The first three were fined, and Hayward lost his licence. All of this may strike us as barmy, but in 1917 it was the law.

It had been illegal to ‘treat’ or ‘stand a drink’ since the spring of 1915, when David Lloyd George launched a full frontal assault on Britain’s drinking culture in the name of winning the First World War.

In late 1914 and early 1915 the Western Front was taking shape, as the German Army dug in to defend its territorial gains in France and Belgium. British soldiers and politicians were trying to get to grips with the new phenomenon of trench warfare, in which artillery would clearly play a major role. But the Army lacked ammunition: there was a ‘Shell Crisis’. Lloyd George spotted an opportunity to play a bit of politics, by drawing a link between the Shell Crisis on the Front and industrial discipline at home. With no solid evidence, he asserted that the main reason for the shortage of shells was that munitions workers were drunk.

He quickly found a ready audience, because the War had unleashed a storm of moral panics and crusades. Self-appointed guardians of public morals insisted that, with the country at war, it was outrageous that some still sought entertainment in pubs, cinemas, football grounds or music halls. Even sex wasn’t safe. Lord Kitchener refused to allow condoms to be issued to British soldiers, insisting instead that they should ‘abstain’, for which he was publicly praised by the Archbishop of Canterbury. The prominent suffragette Christabel Pankhurst also chimed in, claiming that most men had VD and should learn to be ‘chaste’.

Even with Lord Kitchener and Christabel Pankhurst on board, a campaign against sex was doomed. But Lloyd George calculated that a campaign against drink might succeed; and if he could position himself as its champion, rich political rewards may come his way. The temperance movement was, after all, part of the cultural landscape, part of the whole non-conformist and evangelical Christian tradition. Leading figures in all political parties were declared teetotallers. Here in Penge the local Band of Hope had been active since the 1870s, working closely with the Baptist and Congregationalist churches, running weekly services for children, and public meetings for adults, preaching the evils of drink. Similar groups were at work all over the country, providing a ready-made body of support for Lloyd George’s new measures. And the measures were drastic: in addition to making ‘treating’ illegal, he raised the price of drink, reduced its strength, and cut pub opening hours to two hours at lunchtime and three in the evening. 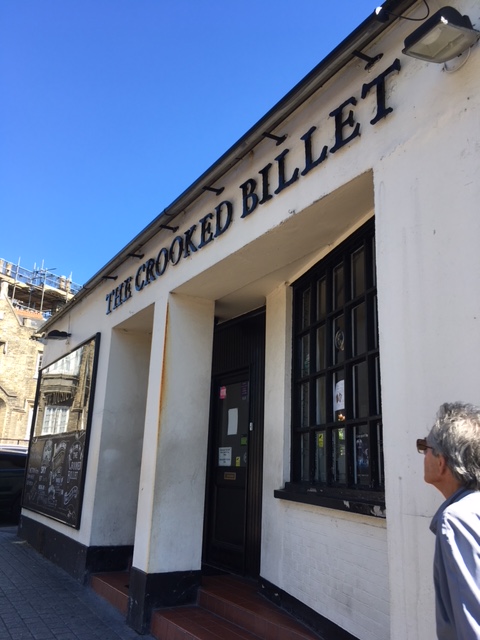 Pubs everywhere were affected, but for Penge’s pubs these new laws came on top of another sudden wartime measure, the closure of the Crystal Palace.

The vast Crystal Palace complex, combining museum and sports arenas and concert hall and conference centre and an ever-changing kaleidoscope of amusements, was mostly located within Penge’s boundary. And for sixty years it had provided reliable passing trade for Penge’s shopkeepers and landlords, as visitors wandered down to browse in local shops, or to have a drink in one of the sixteen pubs lining the High Street between the Penge Gate on Thicket Road, and the junction with Croydon Road. Then suddenly, out of the blue, in February 1915, the site was abruptly closed to the public and occupied by the Royal Navy which used it for the rest of the War as a ‘training depot’.

Whether this led to a loss of trade for Penge’s pubs is hard to say: it may be that the loss of civilian customers was recompensed by a new influx of thirsty naval trainees. But even so it must have required some adjustment to deal with this sudden alteration at the same time as beer became weaker, prices higher, hours shorter, and landlords’ livelihoods were put at risk every time someone took it into his head to buy a drink for a mate.

The anti-drink laws of 1915 matter. They were an early signal that the First World War would be unlike any previous war; a ‘total war’, a national mobilisation, leaving no-one untouched. Many other aspects of ‘total war’ would follow in the months and years ahead: state direction of industry, mass employment of women, conscription, food controls, rationing. But drink – or rather the campaign against it – pointed the way.